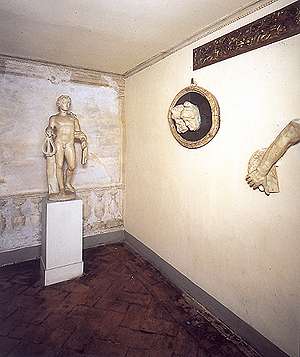 In this small room Michelangelo the Younger had assembled a substantial group of works with classical subjects, though not always of ancient origin. The pieces now on show formed part of the original furnishings: a fine wooden frieze from the beginning of the sixteenth century, recently attributed to Baccio d’Agnolo; an arm carved from marble, probably from a Roman copy of Myron’s Discobolus; an oval of black marble with two heads, given to Michelangelo the Younger by Costanza Barberini and a “small Apollo” in marble.
On the back wall we can discern a much-detoriorated mural painting that simulates a terrace. Presumably, a space to be used as a boudoir – hidden by a specially-made door that still exists today – had been carved out by the window.