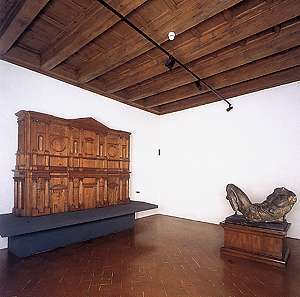 For many years, this room housed two majestic Michelangelesque projects for works intended for the Fabbrica di San Lorenzo in Florence, neither of which were ever realised. The great wooden model for the facade of the church of San Lorenzo stood for a long time in the vestibule of the Biblioteca Laurenziana: it probably came from Michelangelo’s house in Rome, as we infer from a letter written by the artist to his nephew Leonardo in 1555, stating that it would be sent to Duke Cosimo I in Florence. The work was moved to Casa Buonarroti in the late 1800s. The townhouse on via Ghibellina had the privilege of housing and exhibiting the River God – Michelangelo’s enthralling preparatory “model” for sculptures to be placed as further adornment of the ducal tombs in the New Sacristy – for over fifty years. Once the property of Ammannati, to whom it had been given by Cosimo I, the large-scale model was donated to the Accademia delle arti del disegno in April of the year 1583 and remained unacknowledged for so long that its attribution to Michelangelo wouldn’t become a subject for debate until the early 1900s. After being appointed director of Casa Buonarroti, Charles de Tolnay managed to obtain the loan of the work from the proper office in December of the year 1965 and displayed it in the museum, thus finally underscoring its considerable value after years of oblivion. Recalled by the Restoration Office of the Superintendence for the Historical and Artistic Heritage of Florence in December of the year 1986 for preservation work, it subsequently returned to Casa Buonarroti with the warning that such a fragile sculpture should not be moved or handled in any way. The same preservation problems required major restoration work to be carried out by the Florentine Opificio delle Pietre Dure and performed in loco; this work was completed in the spring of 2017. Following its display during an important temporary exhibition in Florence, the sculpture was never returned to Casa Buonarroti, where only a panel is left to commemorate it.