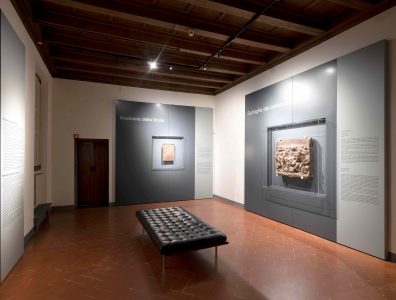 This room houses the two reliefs carved by Michelangelo in his early youth, which are the true and most widely-recognized emblem of the Casa Buonarroti.

Michelangelo the Younger had put them on display in the seventeenth-century rooms of the piano nobile: the Battle in the Galleria, under the large picture of the Epiphany by Ascanio Condivi, attributed at the time to Michelangelo; the Madonna in the Camera degli Angioli, which also contained, and still contains, a bronze replica of the relief.

In 1875, Casa Buonarroti was one of the principal symbols of the celebrations for the fourth centenary of the birth of Michelangelo that were staged in Florence. One byproduct of the event was the moving of the Battle to the room, in which it can still be seen today, while a memorial tablet was installed underneath the Epiphany.

The Madonna, on the other hand, remained for a long time in the Camera degli Angioli, where its presence was still recorded in 1896.

Yet photographs taken at the beginning of the twentieth century show Michelangelo’s two reliefs in the same room, where they were displayed for several decades alongside pieces from the family collections and nineteenth-century curios. In the early 1950s, with the rooms filled with what was often a motley selection of objects, or one laid out with any regard to without quality or content, the need for new solutions started to become apparent. The efforts were focused on just this room.

A study of the various attempts that have been made to give the correct prominence to the two reliefs, from the fifties down to the present day, is of great interest, in part because it allows us to grasp the uncertainties and difficulties that postwar culture continued to encounter in its efforts to come to grips with the art of Michelangelo.

Thanks to the generous support of the Friends of Florence Foundation, it has been possible to carry out the restoration of the Madonna of the Stairs and the Battle of the Centaurs, conducted by experienced restorers Daniela Manna and Marina Vincenti (2020-2022).

The dusting and light cleaning to which the reliefs were subjected gave such results that the pre-existing arrangement was inadequate for their best appreciation: the architect Leonardo Stanta, who has long been responsible for setting up the exhibitions at Casa Buonarroti, designed new structures that make Michelangelo’s two reliefs stand out like precious gems; the work was completed by new LED lighting designed by Lorenzo Querci, which allows every detail of the restored sculptures to be read and returned to the admiration of visitors.

The refurbishment of the Room of Michelangelo’s Marbles was also made possible thanks to a donation from the Friends of Florence Foundation.