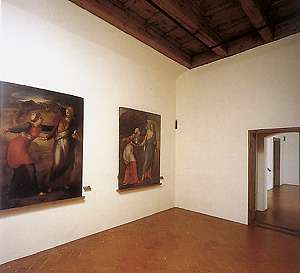 The composition of the two paintings on show here, one attributed to Pontormo and the other to Battista Franco, which were transferred to Casa Buonarroti from the Florentine Galleries in 1932, derives from a lost cartoon by Michelangelo, executed in 1531, which depicted the risen Christ appearing to the Magdalene. The cartoon was made into a painting by Pontormo at the suggestion of Michelangelo himself. Entering the Medici collections, it was used again by Battista Franco (1537), who reproduced the landscape of Albrecht Dürer’s print of Saint Eustace in the background.