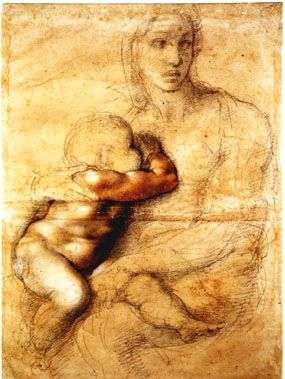 Michelangelo Buonarroti
Madonna and Child
1525 circa
black pencil, red pencil, white lead and ink,
541 x 396 mm
inv. 71 F
Executed an a support made by gluing two sheets of paper side by side, this drawing has been described as a “cartoon.” Yet it cannot be the preparatory phase for any work known to us, whether by Michelangelo or any artist linked to him. On the other hand, it is illuminating to think of this work, without parallel in the corpus of Michelangelo’s drawings, as a meditation on a motherhood too painful to permit the establishment of a true relationship of love with the child, a theme that constantly preoccupied the artist. It is no coincidence that the most notable correction on this sheet reveals that Michelangelo had originally drawn the Madonna’s face in profile, with her eyes lowered to gaze down at the Child: this was an echo of a tradition of tenderness between mother and child that the artist, here and in so many other places, was unable to accept from his teachers, preferring instead a dramatic absence of communication. In fact the image of the mother that we see now has a pose and expression that are totally detached from the baby at her breast, and a gaze that loses itself in the vision of future misfortunes. If we restrict our point of view merely to that of psychology and content, then there can be no doubt that the enigma of this gaze had already been explored by the adolescent Michelangelo, in the Madonna della scala. But the idea also evolved stylistically over the course of time, reaching a peak in the mysterious Madonna in the New Sacristy, whose undeniable affinities with this drawing provide confirmation of the date accepted here. Numerous retouches can also be seen in the Child, whose head is sketched with
a delicate use of shading that makes it resemble that of the Mother. The body, on the other hand, drawn and finished to produce an effect of pictorial illusion, is totally devoid of any sense of the sacred, as Paola Barocchi has effectively summed up by speaking of the “powerful plasticism of the putto.”
The disparity in expressiveness and technique of representation between the two figures certainly renders any general interpretation of the drawing problematic. And yet it remains inexplicable that a few scholars, though of the stature of a Berenson or Dussler, should have used this disparity to deny Michelangelo’s authorship of the drawing. Michelangelo the Younger had recognized the excellence of the “cartoon,” placing it in the Camera degli Angioli, i.e. at the physical and spiritual center of the eighteenth-century rooms he created on the piano nobile of the house. But the drawing reached the peak of its fame in the nineteenth century, and in particular on the occasion of the centenary of Michelangelo’s birth in 1875, when the exhibition of drawings in Casa Buonarroti made the collection known abroad, as well. It was probably during these years that an intervention discovered during a restoration was made: the upper part of the sheet shows signs of having been cut off. This was probably done to make it fit into a frame, but it has removed the central part of the Madonna’s veil.