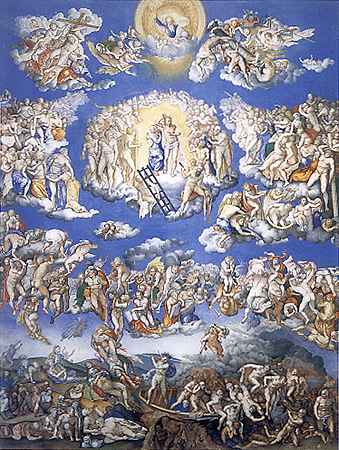 This illumination entered Casa Buonarroti in the 1930s. The fact that it was once part of the Medicean collections has recently been confirmed by Silvia Meloni Trkulja, who has shown that it was one of the precious objects from her family collection that Vittoria della Rover brought as a dowry to Ferdinando II dei Medici on the occasion of their marriage. Thus the parchment became the property of the Medici family along with several other illustrious acquisitions, including Titian’s Venus of Urbino and the double portrait of the Duke and Duchess of Urbino painted by Piero della Francesca.
The Judgment in the Sistine Chapel, as Giovanni Agosti has pointed out, “appeared, to Vasari’s eyes, to have a finish unrivaled by any miniature. And this was no small praise, among the many that were heaped on Michelangelo’s masterpiece, given that it was made at a time when the precious and extremely intimate works of Giulio Clovio were all the rage in Europe, and the illumination was experiencing its last period of glory. Thus a miniature depicting the Judgment ran the risk of turning into a display of uncommon virtuosity: that of reducing almost two hundred and fifty square meters of fresco with three hundred and ninety-one figures to a small square of parchment.” And yet none of them are missing from the miniature: all the original nudes can be seen, including the group that created the most scandal, St. Blaise with the brushes in his hand eyeing St. Catherine on the wheel (on the far right, in the middle): a group that was not just provided with “breeches” but actually repainted by Daniele da Volterra in 1565.
The illumination is almost identical to the engraving of the Judgment that was made by the Dalmatian Martino Rota in 1569, though not directly from the original. Yet the variations are significant. And rather than variations, they seem to be corrections, and not gratuitous ones, if we recall the extent to which, on its appearance, every detail of this work of Michelangelo’s was subjected to iconographic scrutiny, from both the formal and theological perspective. Christ for instance, has been given back his beard, whose absence in the fresco drew much criticism (note that Christ is also bearded in the large picture by Alessandro Allori hanging in the same room of the Casa Buonarroti and reproducing the central group of the Judgment). At the top of the illumination, where a portrait of Michelangelo appeared in Rota’s print, are set God and the Holy Spirit, in deference to the prescriptions of the Counter Reformation. The stylistic features of the work point in the direction of Giulio Clovio, the most important illuminator of the sixteenth century. It seems possible to recognize, though somewhat attenuated by its execution by the workshop, the “manner of working in dots, which I call atoms, that like a finely-woven veil resemble a cloud laid over the painting,” as Francisco de Hollanda so clearly characterized Clovio’s style.