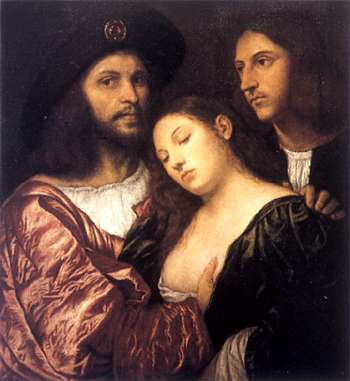 Venetian artist of the first half of the sixteenth century
Amorous Scene (after Titian)
canvas, 74,5 x 66,5 cm
inv. 69

The painting was bequeathed to the “Galleria Buonarroti” by Rosina Vendramin, the wife of the family’s last direct descendant, Cosimo. The subject of this amorous scene is not known. In the past it has usually been interpreted as a death of Lucretia, but also as a representation of Pompey supporting a swooning Cornelia. However, this virtuous interpretation clashes with the detail of the man sliding his hand under the woman’s breast.
Numerous replicas of this composition are known, in public and private collections: the one in Casa Buonarroti is the most famous, along with the one in the English royal collections.
There has been long debate over the inventor of this popular scene: the names of Giorgione, Sebastiano del Piombo, Pordenone, Romanino, Paris Bordon, and Cariani have all been put forward, but the most likely candidate still seems to be Titian, to whom by family tradition Rosina Vendramin attributed the work in her possession. For stylistic reasons, the original of the Titianesque composition has been dated to around 1512.
In 1980 Mauro Lucco attributed the example in Casa Buonarroti to Paris Bordon, attribution also accepted by Silvana Seidel Menchi and Diego Quaglioni (2006), though they underscored the presence of the third character on the right and attached a ritual meaning to the scene, as the women is given in marriage to her bridegroom by a close relative, thus signifying consent to the marriage. The existence of other, similar inventions – and especially the harmonious and graceful tone of the demeanours – lends credence to this stimulating hypothesis.