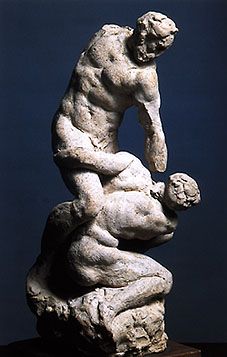 This terracotta sculpture – whose authorship by Michelangelo is by now undisputed – is one of the most prominent pieces in the collection of models in Casa Buonarroti.
A detailed mention of the work is first made in the Casa Buonarroti inventory of 1859, drawn up the day after the Casa was turned over to public fruition, and its subsequent establishment as a body corporate. This document, as well as the guide to the Casa published in 1865 by its first curator, Angiolo Fabbrichesi, records the existence of four fragments – including two heads and an arm – of unknown relevance in addition to our model, identified as “Hercules and Cacus”. The situation was captured visually in a late-nineteenth century photograph by Brogi depicting the showcase where the abovementioned pieces were displayed along with other models. Though the arrangement of the fragments leads us to imagine a correct insight into their connection to the group of the two wrestlers, it wasn’t until 1926 that restorer Enrico Massai reassembled the two heads and the left arm of the standing figure, with the support of superintendent Giovanni Poggi and under the supervision of Johannes Wilde. Wilde based his proposal on three drawings made by Andrea Commodi (presumably in the second decade of the 1600s) and currently kept in the Gabinetto dei Disegni e Stampe degli Uffizi (inv. 18524 F, 18665 F, 18666 F). These drawings reproduce the work nearly in its entirety, and in any case still including the two heads and the left arm of the standing figure. What the three copies don’t tell us is whether the latter figure was already missing its right arm – its most manifest deficiency, even today. Wilde’s project did not, however, include the fragment marked as number 9, visible in Brogi’s photograph and described in the 1859 inventory as “un pezzo informe in terra con foro superiormente” (“a shapeless piece in terra with a hole at the top”). Despite the several doubts raised by the fragment, it was deemed useful to place it on display next to the Two Wrestlers in the new museological arrangement of Michelangelo’s models in Casa Buonarroti.
The work has often been linked to the Medicean commission of a large-scale sculpture portraying Hercules and Cacus that was meant to be set up alongside the David in front of Palazzo Vecchio. Mention must be made here of this tormented episode in Michelangelo’s life, of which we find documentary traces from 1506 onward, though the project wasn’t taken up again seriously until 1525, when the task was given to Baccio Bandinelli. Following the banishment of the Medici family, in August of the year 1528 the Florentine Republic once again charged Michelangelo with sculpting the two figures. With the end of the Republic and the return of the Medici, however, the task was assigned definitively to Bandinelli, who completed his colossal group representing Hercules and Cacus – which still stands in its original location in Piazza della Signoria in Florence – in 1534. Wilde had claimed the impossibility of linking the Casa Buonarroti model with the abovementioned commission as far back as 1928: indeed, he regarded the proportions of the terracotta as incompatible with those of the marble block that must have been used for the work. Instead, the art historian suggested a link between the model and the tomb of Julius II, viewing it as a study for an allegorical group that was to form a companion to the Victory, probably sculpted between 1527 and 1530 and currently exhibited in the Salone dei Cinquecento in Palazzo Vecchio. Further attempts to identify the subject of this group include Samson and the Philistines and Hercules and Antaeus. However, the absence of any specific features prevents us from moving beyond a general iconographical definition such as the abovementioned one of two virile figures wrestling.
A wax copy, almost identical in size to the original, is housed in the Victoria and Albert Museum in London (inv. 4108-1854), where it arrived in 1854 from the Gherardini Collection in Florence. The fact that this replica is missing the head and left arm of the standing figure leads us to suppose that it was made at a later date compared to the abovementioned copies by Andrea Commodi.