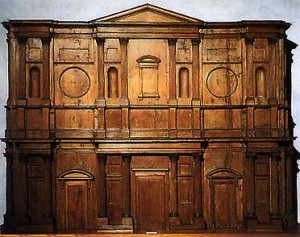 In 1515, two years after he ascended the papal throne, Leo X, a member of the Medici family, decided to pay a formal visit to Florence between November and December. It was on that occasion that the idea was put forward of holding a competition to design a facade for San Lorenzo, Brunelleschi’s unfinished basilica that had been patronized by the Medici ever since its foundation (in 1421) and was also the family’s chosen place of burial. The proposal was made at a time when Michelangelo seems to have been particularly interested in the problems of architectural composition. This may be why the artist put up such a keen fight to be chosen as author of the final project. Along with Michelangelo, Antonio and Giuliano da Sangallo, Jacopo Sansovino, Baccio d’Agnolo and even Raphael took part in the competition. It seems that at first Michelangelo was entrusted solely with the supervision of the sculptural decoration, while Jacopo Sansovino had Baccio d’Agnolo build a wooden model for the facade. Though much appreciated at the time, this has now been lost. Over the course of the year 1516 the rivalry between the candidates for such a prestigious commission grew extremely fierce, but in the fall Leo X gave responsibility for the architectural design of the facade to Michelangelo as well. Having shaken off his competitors at last, he came up with an ingenious solution to the problem that had always beset the architects of the Renaissance: how to apply the classical orders correctly to the irregular facades of church- es on a basilican plan. He made people forget all about the external structure of the church by concealing it behind the secular front of a splendid private palace.
Michelangelo’s design of the facade went through three main phases, which can be identified in three drawings in the collection of Casa Buonarroti, nos. 45 A, 47 A and 43 A. In all likelihood it was the clearly-defined image in the last of these drawings that was translated into the large wooden model in Casa Buonarroti, which itself reflects the passage from the design stage to that of execution, as specified in the contract drawn up between Leo X and the artist on January 19, 1518. On March 10, 1520, Michelangelo himself registered the rescission of the contract, though only with regard to the supply of marble, and the material that had already been collected was used to pave the church of Santa Maria del Fiore. But the building work proceeded, though at a slow pace, and there are reliable records of it continuing up until the April of 1521. This was the year Leo X died. After the brief pontificate of Hadrian VI, Clement VII ascended the throne. Another member of the Medici family, he declared his intention to resume work on the facade on several occasions, and it was only on his death (1534) that all possibility of carrying out the ambitious and troubled, project vanished for good.