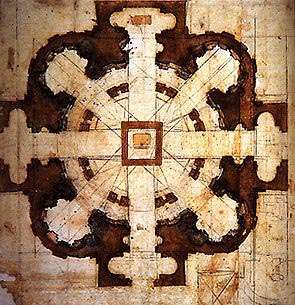 In 1559 the eighty-four-year-old Michelangelo was asked to design a church for the Florentine community in Rome, to be built between the banks of the Tiber and Via Giulia and dedicated to the patron saint of Florence, John, and the patron saints of the Medici family, Cosmas and Damian. The idea, first put forward in the time of the Medici Pope Leo X, now had the support of the duke of Florence, Cosimo I dei Medici.
This splendid work from Michelangelo’s old age represents the last stage in the design, with an altar at the center surrounded by eight pairs of columns and with chapels at the four corners: this is the design that was chosen and of which the artist’s pupil Tiberio Calcagni made a copy to submit to Cosimo dei Medici in 1560. The drawing shows the extent to which Michelangelo modified his designs as he went along. In fact the blackish appearance of some parts of the plan, so different from the central part with the high altar, marks the points where Michelangelo corrected the drawing over and over again, working with pen and brush on top of the still wet white lead. The complex construction of this plan appears to be based on a series of circles drawn with compasses, whose traces are still visible. Michelangelo’s project for San Giovanni dei Fiorentini was never carried out. The construction of the church, which is still standing, was begun in 1582 by Giacomo della Porta, who gave it a Latin-cross plan, and not completed until 1614, under the supervision of Carlo Maderno.