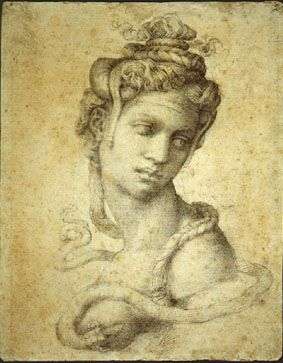 This drawing belongs to the group of Michelangelo’s works known as presentation drawings. This definition, coined by Johannes Wilde, is applied to drawings made by the artist not for the purposes of design or study, but as gifts. They are extremely elaborate images, with subjects that are complex, always profane and often far from easy to interpret. And in fact the Cleopatra was executed for Tommaso Cavalieri, the young Roman whom Michelangelo met in 1532 and who was the recipient of the largest number and most extraordinary of these drawings.
In 1562, when Michelangelo was still alive, Tommaso Cavalieri was obliged to present the work to Duke Cosimo I dei Medici, though he accompanied the gift with a letter in which he said that relinquishing the drawing had caused him no less suffering than the loss of a child. In fact, as the time approached to give up the work, he decided to have a copy made by an “artist friend of his,” as we are informed by a letter dated January 24, 1562, from Cosimo I’s ambassador to the papal court, Averardo Serristori. In 1614, however, Cosimo II had the Cleopatra sent to Casa Buonarroti. Ever since the time, in August 1988, when restoration work on the sheet revealed the existence of another drawing by Michelangelo on the verso, it has aroused considerable interest. The removal of a layer of priming during the restoration brought to light another picture of Cleopatra, identical in composition and with the same feature of the hair turning into a serpent. But, in comparison with the noble and polished classicism of the drawing on the recto, it is much more immediate and there is an expression of anguish on Cleopatra’s face. Alongside the ancient Egyptian queen, there is a barely sketched profile of an old man. Michelangelo’s works have been copied and translated into other media by many artists down the centuries: the fact that there are no copies of this verso leads us to assume that the drawing was covered up very early on.